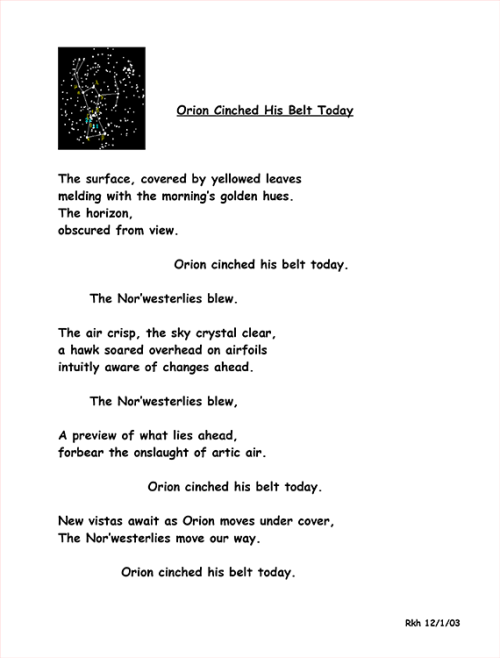 Perhaps second only to the Big Dipper in Ursa Major, the constellation of Orion is one of the most recognizable patterns of stars in the northern sky. Orion, the hunter, stands by the river Eridanus and is accompanied by his faithful dogs, Canis Major and Canis Minor. Together they hunt various celestial animals, including Lepus, the rabbit, and Taurus, the bull. According to Greek mythology, Orion was in love with Merope, one of the Seven Sisters who form the Pleiades, but Merope would have nothing to do with him. Orion’s tragic life ended when he stepped on Scorpius, the scorpion. The gods felt sorry for him, so they put him and his dogs in the sky as constellations. They also put all of the animals he hunted up there near him. Scorpius, however, was placed on the opposite side of the sky so Orion would never be hurt by it again.

See also another version of the Orion myth written by Kevin Grey.

From the northern hemisphere, the three bright stars (Alnitak, Alnilam and Mintaka) in a straight line that form Orion’s Belt are easily visible on the southern horizon in winter evenings. The bright star that forms Orion’s left shoulder is Betelgeuse. The name of this star means “The Armpit of the Central One” in Arabic, which shows that like many other constellations, Orion was recognized across many cultures.

Hanging down from Orion’s belt is his sword that is made up of three fainter stars. The central “star” of the sword is actually not a star at all, but the Great Orion Nebula, one of the regions most studied by astronomers in the whole sky. Nearby is the Horsehead Nebula (IC 434), which is a swirl of dark dust in front of a bright nebula.